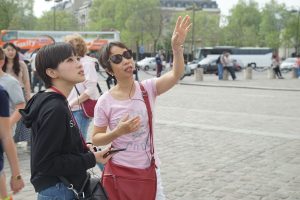 Celia SO PARIS – Explore the city of Light with Celia SO, certified guide and travel planner

When my family suggested going to Antwerp for our Christmas holidays, I thought immediately the container harbor and the diamond trade. In fact, there are a lot more to see ! Antwerp is rich in history and culture. It is complex too !

Complex because this part of Belgium, not like Brussels, is Dutch-speaking. Belgium is a small country, but it is divided into three regions : Flanders in the north, Wallonia in the south and Brussels, the capital city and an autonomous region. Dutch is spoken in the north, whereas French is spoken in the south and in Brussels. Can you imagine two Belgian can not understand each other in their mother tongue and need to communicate in English.

The city of Antwerp is renovating different areas. New iconic buildings are emerging.

A visit to Antwerp is not completed without seeing the paintings of Peter Paul Rubens. Rubens was more than an artist, he was also a diplomat. He was the superstar of the city. When he died, his funeral lasted for six weeks. We can see his paintings in different places, including the Cathedral of Notre Dame Antwerpen and of course in the Royal Museum of Fine Arts (KMSKA).

The city has a vibrant fashion trade too. There are many boutiques with creative designers’ clothing, such as Ann Demeulemeester.

To sum up, Antwerp is a city that offers a unique blend of history, culture, and modernity. Whether you like museums, admiring stunning architecture or shopping in creative designers’ clothes, there is always something for you.